Great Shaman Im looked at me like I was dense.

I actually hadn’t intended to visit Great Shaman Im(92) in her country house, nestled in the carrot fields of Pyoungdae Village, but had scheduled an interview with a younger shaman. I wished to record a version of the Halmang Bopuri, the epic myth that tells the origin of Jeju Island’s fertility goddess.

Just the other day in Ongpyoung Village, the village where a new (and unpopular) airport is slated to displace the native shamanic population that has thrived there for generations, an elderly woman handed me a piece of kiwi saying, “Eat it with your bare hands. That’s how Samseung Grandmother gave it to us, with her bare hands.” There are many sayings and admonitions involving Samseung Grandmother. A lot of fanfare is given to other island goddesses by outsiders to the shamanic community, but it is Samseung who is the greatest among them, not to diminish the likes of Kameungjangagi (Goddess of Fate), Jacheongbi (the farming goddess heroine of the Saegyoung Epic) or the numerable shrine goddesses.

To approach Myoungjinguk Grandmother’s altar, which is arranged by a team of shamans in preparation for the Buldomaji ceremony, you must come in a state of jeongseong, that is, free of taboo contamination. I wasn’t permitted to film or photograph the Buldomaji, the ‘greeting of the goddess’ ceremony, as cameras are suspected to be bujeong (taboo) items. I was graciously permitted by great shaman Go to make a sound recording of the various myths and other music played during the ritual.

The following is a short excerpt from the field recording:

–if the sound is low on a laptop it’s better to use headphones, but careful with volume, drums, cymbals and bells.

On the day of our prearranged interview, shaman Go drove me a few kilometers to Great Shaman Im’s house in her old SUV, as she was certain I’d want to hear Myoungjinguk Grandmother’s myth from Im, the eldest and most experienced shaman on the island. Rumor had it that Im knew myths that weren’t even used in ceremonies anymore, myths that had fallen out of the shamanic canon for one reason or another.

“I want you to tell him Myoungjinguk Grandmother’s epic,” said Go. We sat in the room where Im received guests. There was a heating pad covering the floor.

“I’ve already told him everything,” said Im, stealing a glance, as if to confirm I was the same foreigner who usually visited.

“You didn’t tell me Jacheongbi, the agriculture goddess’s epic yet,” I said.

Go wasn’t aware I was a regular visitor.

I tried not to ask Great Shaman Im about the epic myths, as I feared the telling of them would test her strength. Usually she shared shrine myths that she knew or stories from her life. I’d heard about how she became a shaman each time we met. There was no avoiding burdening her this time.

Before long, Great Shaman Im launched into the epic. Go interjected periodically, sharing details from other villages’ versions of the myth. There were many slight variations in content and character names. I have witnessed many shamans hesitate when starting an epic, as it takes a great deal of energy to tell one, yet I’ve never seen a shaman not get wrapped up emotionally in the telling once they got into the story. Comparing the different versions of myths seems to be a common pastime, perhaps a practical one, as shamans need to adapt to different villages if they get commissioned to do a ritual outside of their own region. Locals judge shamans on their ability to tell the myths correctly.

What follows are the basic plot points of the Halmang Bonpuri–the epic myth which explains the origins of Myoungjinguk Grandmother Goddess and Gusamsing Grandmother, the psychopomp who carries deceased children to the afterlife.

Artwork in this section courtesy of Han A-young. A-young is a Jeju local. (Her website is coming soon! I will provide a link at that time.)

A child was born to the Dragon King of the Eastern Sea and her Western Sea Mother. At 15, she pulled her father’s beard and pinched her mother’s breast. The girl’s father decided to kill her for her transgressions, but her mother couldn’t stand the thought of slaying her own daughter so she had a metal box made, sealed her daughter inside and cast her into the sea.

Around that time, a scholar with the family name Im asked the Guardian of the Heavens to help his wife produce a healthy child. The couple had had no trouble conceiving, but they didn’t know how to solve the problem of giving birth prematurely which always resulted in their infant’s death.

The scholar pleaded to the sky, requesting that the Guardian of the Heavens (The Sky God, Cheonjiwang) create a deity who would rule over childbirth.  A girl named Myoungjinguk appeared and the Guardian of the Heavens set about designing a test. He sent Myoungjinguk to the Earth to meet the Dragon King of the Eastern Sea’s Daughter, the one who had been abandoned to the sea. The two would share the role of the Queens of Childbirth, taking position as goddesses as the scholar Im had requested.

After studying the ways of human birth, the two goddesses ascended to heaven where they were given seeds to plant. Whoever could grow the heartiest flower would win the position Goddess of Childbirth. Myoungjinguk’s plant grew 45,000 blossoms. The plant that the Dragon King of the Eastern Sea’s Daughter raised had but one withered flower on a single branch so it was decided in Heaven that Myoungjinguk would be the Goddess of Childbirth. The Dragon King of the Eastern Sea’s Daughter became the Goddess who accompanies deceased children to the afterlife.

Hearing the news of her defeat, the Dragon King of the East’s Daughter became furious and cut away Myoungjinguk’s flowers, thus giving all the babies in the land with less than 100 days of age all kinds of diseases. Myoungjinguk, showing her typical kind-heartedness, declared that people must acknowledge the new Grandmother Goddess of deceased children with an abundance of offerings. Doing so would help to ensure their return to health.

Buldomaji The buldomaji is the ceremony dedicated to greeting and making offerings to Myoungjinguk Grandmother, the goddess who brings healthy children into the world, heals the sick and ensures good fortune during the formative years. Nowadays, the buldomaji usually lasts from daybreak until late evening. During the ceremony, symbolically, the wilted flower of Gusamsing Grandmother is removed, then Myoungjinguk Grandmother’s flower is ritualistically presented to the mother.

Birthdays People also make offerings to Myoungjinguk Grandmother and Gusamsing Grandmother on their respective birthdays. A shaman will perform divination for the mother of the household to determine to which of the deities an offering should be made.

Some notes on my attendance of a buldomaji

-Intense drums over hours and hours. The friend who attended the ceremony with me was brought to tears. The buldomaji, directed at ensuring a bright future for the family’s children, left an impression on her. When you see myth employed in a healing ceremony of this type you can really see it come alive in people. Several hours into the buldomaji the family who had commissioned the ceremony started to lose their desire to speak. They were chatting and joking with us visitors at first, but then slipped into what I am sure was a kind of trance.

-The father who had commissioned the ceremony was ashamed when we first arrived (not the first time I’ve seen this exact thing happen with men at ceremonies) but then became immersed in the ritual as did the others present. Before the initial ‘invocation of the gods’ chogamjae began, the man, in his mid-forties, told me that he’d commissioned the ritual only because his mother liked tradition. After he realized that my friend( UCLA researcher Tommy Tran), and I were studying shamanism, he began to show pride about his Jeju roots. 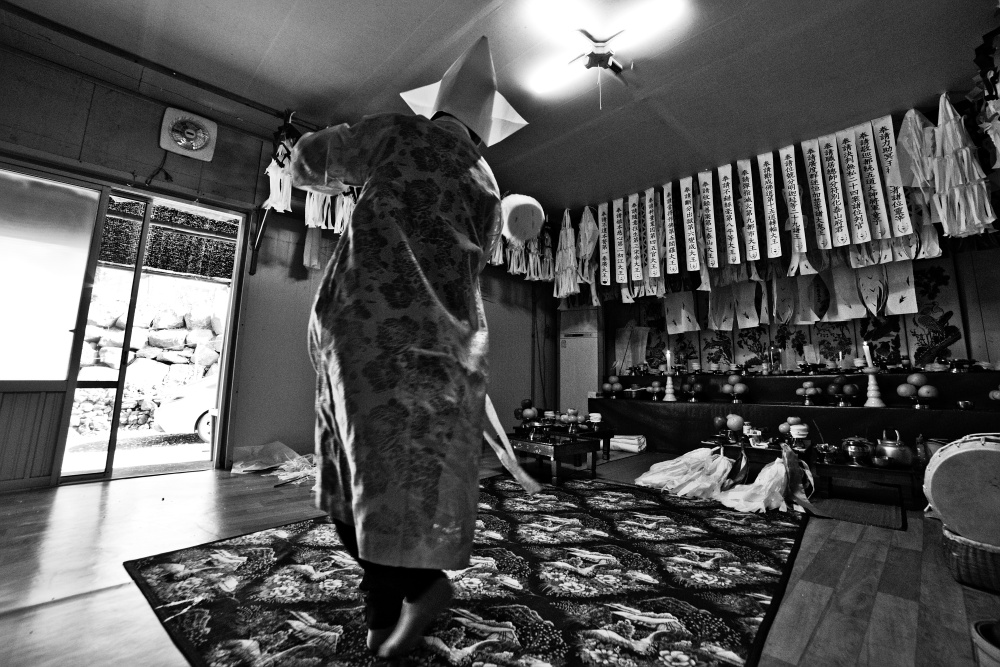 -A young shaman was being trained, it was one of her first ceremonies. There aren’t too many young shamans and she seemed to be amongst the youngest I had seen. The older shamans barked orders at her and gave her a hard time as they commonly do with initiates. It’s a tough occupation and not everyone is cut out for it. One must have absolute confidence in their own abilities to do the job.

-So many people, particularly in this society, are damaged and there is little communication about personal issues. In Korea, communication is made more difficult by rigid social hierarchies. Things grind and grind and then the negative effects of holding things in lash out from the individual. I wonder if these rites, like the Buldomaji, are something the modern era is lacking. One of the women in my documentary said as much one day. Emphatically, pained, she said that her village had been lacking since the last shaman died. It seems like 90% of the island’s shamans are missing now. Yet at this ceremony, there was a potential new shaman. Perhaps she’ll one day be the lead shaman in a village.

-One of the shamans made a traditional paper cutting (gimae) in the shape of a snake, a piece I recognized as an offering dedicated to the Chilseong gods. I like the idea of the snake deities, protectors of fields and storehouses. When I was in middle school I spent several summers catching and releasing snakes.

-The pudasi (cleansing of ill-fate from the clients by the shamans) was particularly intense and lasted a long time. The shaman used the ‘god knives’, metal ceremonial knives whose origins are explained in the Chogong myth (I will be doing a post on the Chogong myth) to spiritually heal the attendees. She repeatedly poked the parents of the children being treated in the ceremony over their head and down their torso. The children joined the ritual when necessary and played games on their phones the rest of the time.

-The younger adults at this ceremony, in their mid-forties, weren’t familiar with the contents of the ritual. In fact, they didn’t know which deities the ritual was being directed to. This is a pattern I have seen and it shouldn’t be assumed traditional shamanism will be thriving in the future just because people still commission rituals. There is a big difference between the elder generation who practice Jeju muism comprehensively and the subsequent generations who do so out of respect for their parents’ or grandparents’ wishes.

Would you like to help out by supporting my work on Jeju shamanism?

Please consider ordering a photo book or an illustrated poster of Jeju Island’s deities. Both items ship internationally and within South Korea.